A community initiative, the Making Waves Youth Theatre Group is generously sponsored by Ross McParland of Greystones Studios and The Whale Theatre, and facilitated by Ciarán Coogan (actor/playwright) and Aideen Walton (Artistic Director Greystones Players) and administered by Joanne O’Shea (solicitor/community volunteer). We aim to provide teenagers in Greystones and its environs with the opportunity and space to learn about and make great theatre, through workshops, productions and attending other theatrical productions.
This creative space will be a safe and secure one, free of cameras, phones, or social media. Our workshops will take place in Greystones Studios every Sunday afternoon (within the school calendar) between 2.15pm and 4.15pm from Sunday, September 30th.

Ciarán Coogan (Facilitator) is an actor and playwright with 20 years of theatre experience commercially, on stage and on screen. He is an accomplished facilitator and has studied both Youth Arts Facilitation and Youth Studies at Maynooth University. Ciarán’s writing credits include One Man Many Voices, commissioned by St. John of Gods mental health services, which toured nationally. His Counter Culture won Best New Short Play at Boyle Arts Festival 2013.

Aideen Walton (Facilitator) has studied acting at The Lír, TCD and directing at DLI UL. In 2016, she founded Greystones Players, a community theatre group, and is currently its Artistic Director, running weekly workshops for members. Aideen’s directing credits with Greystones Players at the Whale Theatre include Dancing at Lughnasa (May 2017), Connections (four one-act plays, November 2017), The Playboy of the Western World (April 2018) and Summer Shorts (June 2018).

Joanne O’Shea (Administrator), a graduate of TCD, is a solicitor with over ten years’ in-house experience as legal consultant with a charitable organisation and five years as Head of Legal Function there. An active member of the Greystones community, Joanne is a member of Greystones Players and has acted in The Playboy of the Western World and Summer Shorts. She is also a qualified colunetter coach with Greystones Athletics Club.

Whether your interest is in acting or in one of the various elements that go into production – sound, lighting, set design, costume, make-up – this group will have a place for you! 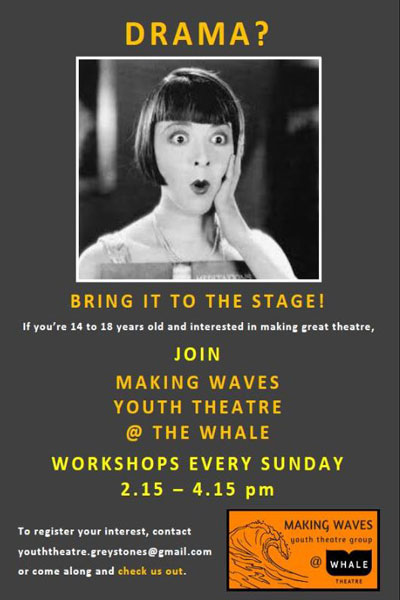