This is Nicolas – Film Screening with Wicklow Triple A Alliance 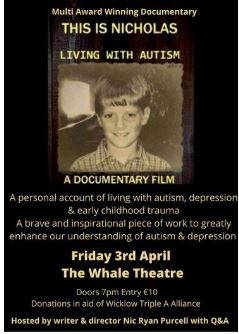 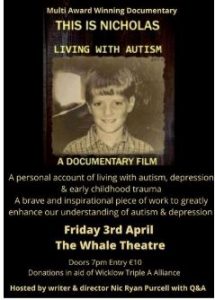 This documentary is a must see.

He was also faced with mental health challenges, brought on by an early childhood trauma which triggered a lengthy depression. Nicholas overcame a series of obstacles to complete his Leaving Certificate and then undertake and graduate from a three-year course in TV Production at Ballyfermot College Dublin.

Now aged 29 Nicholas’s mental health challenges are a thing of the past.

He has made this documentary to chronicle his experience of living with Asperger Syndrome and depression and to celebrate the invaluable support of his family, his teachers and his neighbours in the village of Emly, Co Tipperary.

This is a brave and inspirational piece of work, made with clarity and insight by an insider, to greatly enhance our understanding of Asperger Syndrome

Top prize for the ‘Spirit’ Award in the Foreign Film Category at the 2012 Winter Shorts Film Festival, Somerset, Kentucky USA

One of five nominees in the ‘Best Young Filmmaker Under Twenty-two’ category at the 2012 Corona Fastnet Short Film Festival, Schull, West Cork Ireland

Writer and Director of the film, Nic Ryan Purcell will be in attendance on the night and will host a Q&A about the film afterwards. DVDs will be available to purchase on the night.