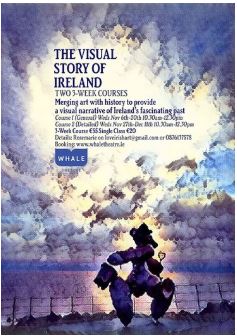 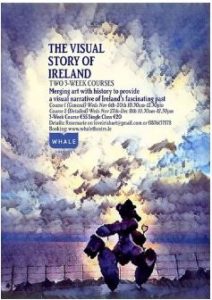 Tracing the inspiration and context behind some of Ireland’s most celebrated works of art is at the core of the Visual Story Of Ireland course being run by local art historian Rosemarie Devereux on Wednesday mornings in November/December.

The aim of both courses is to thematically explore a selection of the paintings that are held in the national collection of art in order to re-engage, through their visual representations, with Ireland’s most significant political and cultural events; to learn more about the people who governed this contentious land as well as those whose livelihoods were dependent on it; finally to examine the context and conditions under which the producers of these paintings worked i.e Irish artists.

Themes that will be discussed in Course 1 are: Politics – its effect on Irish Art; The Development of Irish Painting; Cultural and Social images of 19th Ireland; Land Issues – environmental, political and conceptual; Irish Women Artists; Great Patrons of Irish Art.

Themes that will be discussed in Course 2 are: Irish Artists Abroad; Foreign Artists painting Irish Subjects; Significant Irish Paintings in the National Collection; ‘How the Other Half Lived’ – pictorial representations of the landed class; Modernism in Ireland; The Yeats family and Art.

Rosemarie Devereux is a local art historian, who recently attended UCD from where she completed her Masters in Visual Culture in Ireland 1885 – 1915.   Two of her research articles were published in the Irish Arts Review relating to the work of Jack B. Yeats and his wife Cottie– in Winter 2016 and Spring 2019 respectively. She is currently a volunteer in the National Gallery of Ireland and has recently been accepted onto their Freelance Tour Guide Panel. Since 2017 she has taught a module from the UCD School of Art History degree programme entitled Studies in Irish Painting. Rosemarie has also given several art history talks locally on the development of Irish art. For the past 12 months she has been running a private art history course in the National Gallery of Ireland.

Rosemarie is contactable by emailing loveirishart@gmail.com or calling 0876137578.