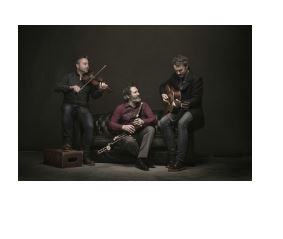 Louth folk favourites Kern are back in 2020 with the trio’s eagerly awaited new album, their first since their critically acclaimed debut False Deceiver.

The Left and The Leaving is a similar showcase of the band’s unusual mix of personalities: Barry Kieran is a former Leinster champion fiddler, steeped in the raw, pure music of Oriel; Brendan McCreanor is an uilleann piper of rare passion and versatility whose distinctive playing is at once both modern and rooted in tradition and SJ McArdle is a critically acclaimed songwriter and singer who has previously toured and recorded internationally.

Kern’s music is a distillation of skillfully executed traditional elements – including a deep respect for native songlines – combined with fresh and often raw contemporary perspectives. Mining the deep cultural seams of their native Louth, the band presents thrilling interpretations of the music of the past and blistering, sometimes heart-wrenching new songs and compositions. The eclectic weave of their music is a result of their myriad influences and diverse formative experiences and backgrounds.

The Left and the Leaving was produced by Trevor Hutchinson and features the Lúnasa/Waterboys man on double bass throughout. There are also appearances by Dónal O’Connor (Ulaid, At First Light) and Eamonn Moloney (Full Set, Aoife Scott).

Kern have been hard at work since the extensive press and radio coverage which accompanied the first album’s release, clocking up the miles on Ireland’s highways and byways. Along the way the band have also played shows in Germany, Canada and the US, including at Milwaukee Irish Fest and Folk Alliance International in Montréal. The band also won the 2018 Temple Bar TradFest showcase.