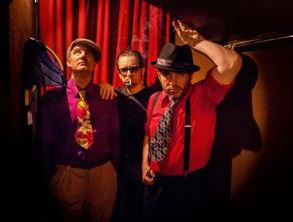 Mr. Shingles was founded in 2015 with the purpose of covering legendary Blues artists such as BB King, Otis Rush, Jimmy Rogers, Magic Sam, Them, Howlin ‘Wolf and John Mayall. From this Classic Blues base, they have developed their sound, mixing Blues and Swing with Latin beats and touches of Jazz and Gospel.

Recent additions of other instrumentalists has brought color and warmth to the project releasing the original core of musicians to play within the space and feel more. Mr. Shingles has played at Barcelona’s most renowned venues: Harlem Jazz Club, El Paraigua, Sala Monasterio or the MEAM as well as festivals such as Anolia Festival de Igualada, Inauditus Festival, Ciclo Blues & Sons and Figueres Summer Festival. In 2018, they released there first studio album, “Green in Blue“. A band that stands out for being versatile, international and innovative; but at the same time full of respect for the Blues tradition.

… a professional from head to toe, having withstood a thousand and one battles, he offers the public a varied repertoire, from B.B. King to Van Morrison to classics like The Midnight Special.    Jordi Monguillot, Sentir el Blues

…an honest interesting album performed by a group of musicians who know the music they play and carry it out with conviction and respect.    Roser Infiesta Valls & Vicente Zúmel, La Hora del Blues

…an album that can definitely be called a must   Freddy Vandervelpen, Rootsville Magazine