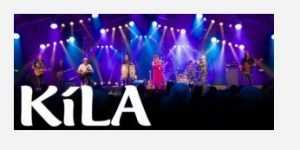 Recorded during Kila’s 2016 tour of venues and festivals throughout Ireland – specifically at the Civic Theatre, Tallaght and Vicar Street – this live outing showcases the eight-piece South Dublin collective at the height of their magnificent onstage powers. With crowd noise low in the mix, there’s little sense initially of it being an actual live recording. But the playing is, as always with Kila, energetic and inspired, while the band – still led by the O’Snodaigh brothers, Colm, Rossa and Ronan – retain their wonderful sense of musical adventure.

Pulsating and polyrhythmic, the opener ‘An Tiománaí’ – that’s ‘The Driver’ as Gaeilge – sets the scene for an incendiary ride through their two-decade long catalogue. Blending swampy guitar, a part spoken-word vocal, and an infectious traditional air, it captures all the elements which have made Kila such a unique live force.

An instrumental, ‘Skinheads’, starts out in a slow, mellow fashion, with some lovely ensemble playing, seamlessly weaving whistles, flute and guitar together, before igniting into in an almost Riverdance-style crescendo of fast rhythms and dense organic textures. Displaying influences ranging from Horslips and Moving Hearts to Jethro Tull, the epic seven-minute piece goes through several time signature changes, before building to a spectacular finale. This is great stuff.

Meanwhile a funky bassline and an urgent melody underscore the familiar ‘Electric Landlady’ – a popular single from around a decade or so ago that puns exquisitely on the Jimi Hendrix album title – while the harmonies on the largely a capella ‘Raise the Road’ are impressively precise.

Elsewhere, Middle Eastern and Afro textures are apparent on the atmospheric ‘Pota’, underlining Kila’s world music credentials, while other highlights include the haunting ballad ‘Babymouse’ and ‘Mutatu’, which showcases the wonderful uileann pipe playing of James Mahon. Long may they dance rings around us all…