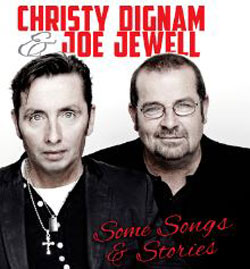 Christy Dignam and Joe Jewell will be performing their intimate acoustic show “Some Songs and Stories” live at Whale Theatre.

The show features some well known Aslan songs plus many songs by other artists that influenced Christy and Joe throughout their career. The lads tell some great stories about their lives in one of Ireland’s most famous rock bands. The show is a must for any fan, and it is really a very special treat to experience this great show in such an intimate environment.

Christy Dignam is regarded as one of Irelands greatest singers and performers ever. Despite Christy’s recent health scare, he is still performing and has never sounded better. U2’s Bono is a big fan of Christy, and has said about Christy “What a voice, what a voice, the Angel of Dublin“. U2 invited Christy to perform with them at their recent sold out Dublin gigs, but Christy had a prior engagement at a charity fundraiser show, and had to turn down the invite from the biggest rock band in the world.

There is some great humour in some of the stories that Christy and Joe tell. It’s two lifelong friends since childhood in Finglas, who lived the rock and roll dream, and survived to tell the tale.