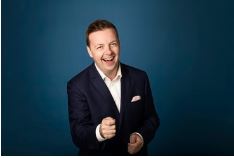 Aiken Promotions is totes excited to announced RTÉ’s award-winning show Callan’s Kicks Live on stage at The Whale Theatre for a very special “live rehearsal”. Oliver Callan brings his huge cast of characters to the stage for the first time in the age of Boris and Trump. It’s no Kylie concert, but heads a troupe of voices from the world of Irish politics, sport and entertainment.

With the 2020 General Election just passed, Callan deconstructs our leaders and stars in a special night of comedy and satirical commentary.

Oliver Callan brings his most ambitious live show yet, with dozens of impressions, sketches and voices kicking our leaders and legends into the next decade.