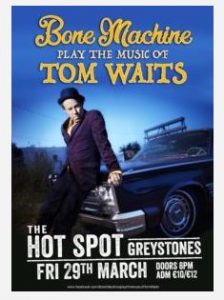 For the past year Irish audiences have witnessed an incendiary show performed by BONE MACHINE, that captures the character and musical genius of Tom Waits. An exhilarating performance that’s playing to packed houses of increasingly adoring fans. The world of Mr Waits is uniquely presented with a characteristic authority rarely harnessed by mere mortals within any single show to date. Bone Machine are a band of internationally renowned touring and recording musicians that perform a firebrand, melancholic, and punk jazz set of Tom Waits songs. The band comprises Jack Healy on vocals and social strategy, Martin O’Malley on guitars and sonic sculpting, Jon O’Connell on bass and positive vibes and Adam Shapiro on drums and rhythmic karma. Each member of Bone Machine has performed in front of thousands of people at home and abroad over the past number of years in bands such as The Van Diemens, The Walls, Serious Mischief, The Fiddle Case and Raise the Rafters.